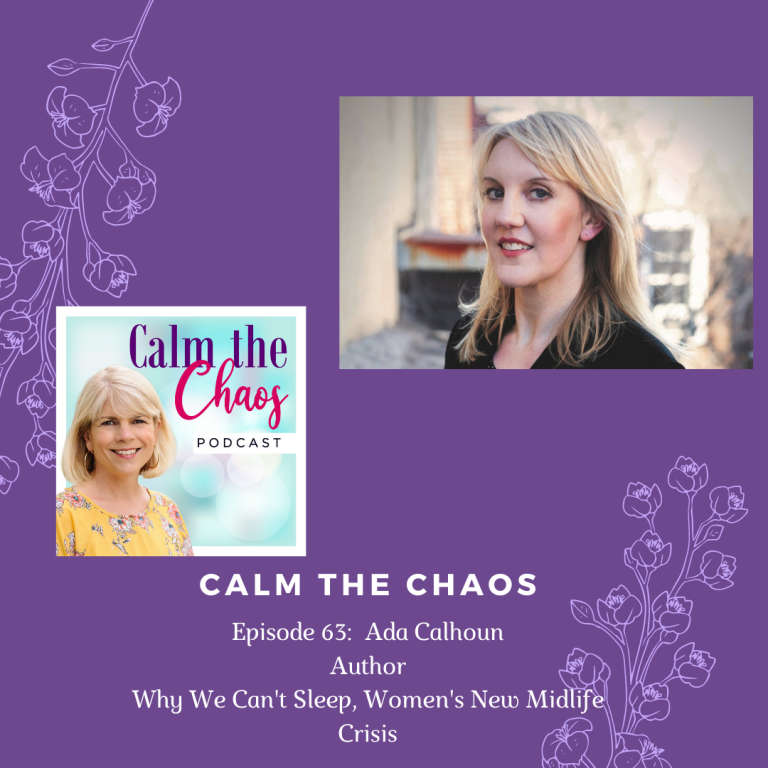 This week’s podcast guest is Ada Calhoun, author of the NY Times Best Seller Why We Can’t Sleep, Women’s New Midlife Crisis. This book dives into how Gen X  women were raised to “have it all”  and “do it all”  and how that’s led to its own set of problems down the road as we’ve gotten older.

Even though Ada identifies the Gen X  community in  this book,  it is geared toward women in middle age who are going through a lot and recognize  that we all hit a period of time when we are trying to do too much as a generation of women and we feel overwhelmed

For Ada this season happened a couple of years ago during a summer season. Ada had some work issues, credit card debt, career concerns, and children going into different seasons at the time and it felt that everything was piling up. For evenings she would stare up at the ceiling until four in the morning thinking “where did I go wrong?” and “why is this so hard”?

It was right at this time that Oprah.com asked her to write an article about this generation of women which was not only liberating for Ada but became this book! While writing the book, she realized she was not crazy and there are a lot of women going through a very difficult time as well.

In the book, Ada looks at all the reasons why the title is true. Women have anxiety about their careers, company loyalty, benefits, and staying relevant. In another chapter, the conversation is around divorce and how 40% of women have divorced parents which may come with emotional baggage. The topic surrounding money is shared and how the cost of living is so much higher now and the wages are just not keeping up accordingly.

Many Gen X  women were told that they could do anything so then they began to think that they should do it all and do it perfectly.  This led to a lot of perfectionism and a sense of failure if they didn’t excel at one thing or everything! This has led to a lot of shame and anxiety which is shared throughout the stories.

Women share how they need to look at all these things they have to accomplish and feel that they are doing it alone.  Most women have felt that they were left to fend for themselves.   This leads to not only a lot of anxiety but loneliness.

One of the chapters written that resonated with Ada is the perimenopause chapter.  Women discussing the feelings that would come on suddenly. Sometimes sadness or anger would just surface at unexpected times.  Ada shares how she became angry because, in all the years of going to the doctor and reading women’s magazines, no one had ever said the word “perimenopause”.  And that’s why this chapter is lengthy as she talked to a lot of doctors and wanted to give women the information and the knowledge to know that there is something you can do about it!

The feedback that Ada has gotten from readers about the book is that they feel seen as they had been feeling invisible. And that hearing from the other women made them feel less alone.

To Calm the Chaos Ada loves to go on walks, cook, hang out with her kids, and gets a lot of enjoyment listening to Agatha Christie Audiobooks!  Ada also gives a piece of advice to Gen X women:  Be honest about what you are dealing with and with other people.