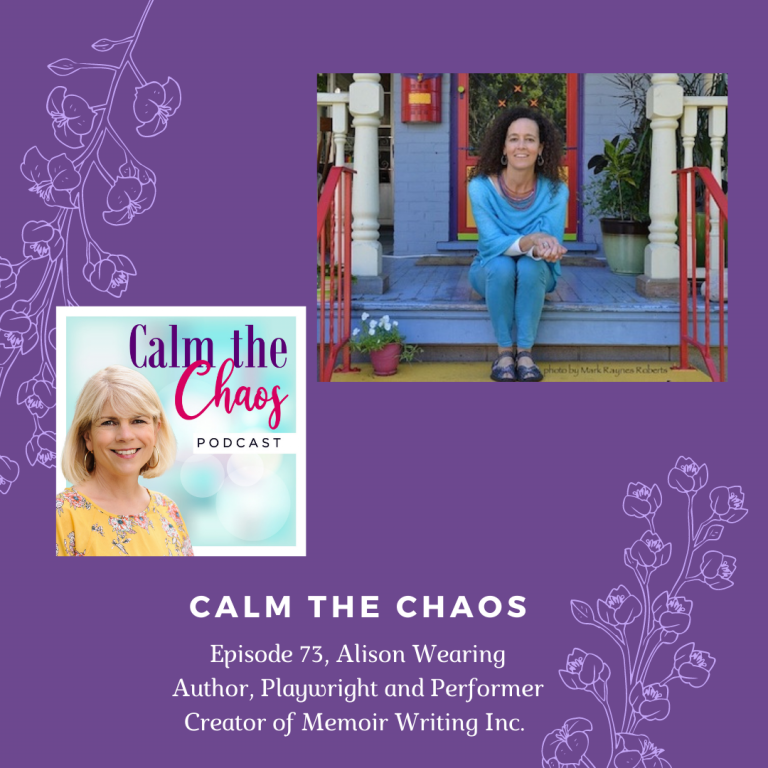 Alison Wearing is a best-selling author, playwright, and performer.  She is also the creator and facilitator of Memoir Writing Ink.   In our conversation, Alison shares how she guides people through the process of transforming personal stories into a memoir.

Alison shares her background as a full-time writer and her thoughts and feeling which surround that journey in calling herself a full-time writer!  She mentions how writing letters in lieu of conversations helped her to realize that she was a writer when she received some feedback on a letter sent to a former professor. They encouraged her to submit it to the newspaper and how once it was published, she had this feeling of shock and began to see herself as a  writer.

She then began being interested and traveled to places that seemed to cast some darkness to see what she could find.  Her travels took her to Serbia and Iran amongst many places.   Alison’s writings about her travels in Iran led to her first book. She then goes on to share about her journey after that book and how that process was for her mentally and emotionally.

Alison then goes on to share how conducting a public reading in Mexico lead someone to suggest that she do some theater which she hadn’t considered because she felt that she was a writer.  (  the stories we tell ourselves ) We talk more about the labels we give ourselves and how often they limit us.  The next thing she knew after doing some thinking, she then created a show and began performing a one-woman show across the country!  This adventure led to her creating another performance based on her book: Confessions of a Fairy Daughter.

We dive into speaking further about the labels we give ourselves and how that affected Alison and how imposter syndrome haunts so many people, especially women. She shares a couple of stories of when someone asks her what she does, she had a hard time saying that she actually is a writer or does theater. Have you had this happen to you where you wanted to own a new story for yourself but had a difficult time shouting it from the rooftops?  Alison recalls a time when she began making a full-time living at acting and yet had a hard time saying out loud that she was an actor.

Alison shares how she started her program Memoir Writing Inc.  She was asked to teach a series of masterclasses regarding English and writing. Not having ever taught, Alison embraced the opportunity to do something uncomfortable that frightened her.  It felt right at this time to move into the discomfort as she believes that’s where the energy is in the process and that’s where the mystery unfolds.  She said YES!  Then began figuring out how to do this. ( A big YES for Alison! )  She shares what this process looked like for getting ready for this next journey.  From there Alison began organizing her own retreats and taught more.  When she would perform, she would give a workshop the next day and the workshops became more of what she did and she enjoyed it more and more.  Soon the writing retreats were in France and Mexico.

She found in the classes that people had a similar set of obstacles when people began writing their memoirs and she was beginning to cover the same type of information.  It was then that Alison began saying the same thing over and over again so thought “ I should record myself saying these things so that I can have their basic questions answered”. This is how the process began with the workshops.  She thought that she would love to make this available to anyone, anywhere so they don’t need to come to the workshop and could complete the material on their own time. Her workshop is now a twelve-week program that is comprehensive.  Not only is it an online program but she does offer an online community so there is live support with Q & A‘s so you have the opportunity to interact and get feedback.

Alison finds her work teaching her memoir classes very rewarding.  Her greatest joy is waking up and opening an email from a student who shares a breakthrough in their writing.  Or to say that they just finished their project.

We then go on to chat about why people find it so important to write a memoir.  The value of writing the story is not whether or not it gets published, the value is in the “excavation of it”. One of the great primal urges in human existence is to know and understand ourselves. Perhaps that is why getting our lives on paper is so important. When we know ourselves, then we are fuller and richer people. Not just for ourselves but for everyone we come into contact with in our journey.  These are Alison’s actual words that she shares and I felt that it was very interesting to share regarding this need to capture our “time”.

Our discussion about writing a memoir takes an interesting turn where Alison shares how when writing your story down, you begin to feel removed from the story and there is an unexpected “liberation” in the process.  You begin to take “my story”  into “a story”.  It no longer defines us in the same way.  The story has shaped us but we are so much more than our story and we are more than the story of what happened to us.

We wrap up our conversation by talking about the literary contest which Alison is running on her site. It is in honor of a woman that attended her retreat in France in 2019. She was 34 years old, Amy McCray and she was writing about a terminal diagnosis that she had received.  Alison created a literary prize in her honor to raise money for her living legacy which raises funds for ovarian cancer research.

I ask Alison if there is anything else she would like to share with the listeners and she mentions how much she loves being a woman in midlife and wouldn’t want to go back!  She shares that for many of us the expectations of the “should do’s” begin to fall away which is really nice.  She also feels that she has so much more to offer the world than when she was 25 or 30.